On the 25th and 26th of November, the Cube participated in the Dengue Hackathon organized by the diHub. The Cube’s goal in this event was to analyze digital messages about the Dengue Virus on a worldwide level in order to make some interesting insights emerge. In addition to Europe, we chose two countries, Brazil and India, to draw a panorama on how people communicate about the Dengue.

On an annual basis, the first results show surprising patterns: even if India’s population is six times larger than that of Brazil, the country only generated 309,000 messages, compared to Brazil’s 1.1 million [1]. A quantitative subdivision of media types brings Twitter in first place, with 72% of all messages sent for Brazil, and 88% for India).

We notice a reactive pattern for India: one big communication peak during two weeks which correlates with the explosion of the virus. There’s no other peak before or after the outbreak, nor any “momentum” of communication. In contrast, Brazil seems to have a societal approach: the communication is characterized by different peaks for a period of at least four months.
If we look closely to the results on a small period of 4 days before and after the most “communicative” days in 2016, India lives with an even higher percentage of Twitter results in the media mix (93% of all messages) meanwhile Brazil gives the exact same results over the year.

Emotion vs. Analysis
Our tool allows us to detect the most frequently associated words with Dengue. In both countries, although the other associated terms are very different, the Dengue virus is associated with another “mosquito-virus”: Zika in Brazil and Chikungunya in India, both transmitted by the same mosquito as Dengue, Aedes Aegeptyca. In Brazil, we see words from other South-America countries such as Venezuela and Salvador, institutions both national and international (Ministerio da saude, mundial, etc.). In India, we don’t find any institution, but rather political figures such as Narenda Modi, Arvind Kejriwal and Satyendar Jain. The results were filtered with the names of institutions (in different languages), and we saw that they appeared in 5% of the Brazilian results, while in the Indian results, they only match 1% of the time. We could carefully advance that India has a more reactive response to the Dengue, due to the outbreak of the disease, while Brazil has a more societal approach of the problem.

Minecraft, Really?
Pushing the analyses further brings (even more) astonishing results. Over a period of eleven months, more than 11,000 YouTube videos about Dengue were produced in Brazil. The most popular is a 12 minute video based on the video game Minecraft, we can see patients and a doctor as Minecraft characters, with one character  talking about the disease. There were also many tweets using Dengue as an expression, for example, “my WhatsApp is as still as the water for the Dengue’s mosquitos.” Twitter isn’t only used to talk about the Dengue disease in a literal sense, but also in a metaphorical way.

Crossing data
The website healthmap.org shows interesting maps illustrating the regions where outbreaks have happened. These outbreak data provided us with our first valuable insight: in which provinces/districts could the stream of social media messages be significantly larger than somewhere else? We reasoned that people in an outbreak region are more inclined to post messages on Twitter or Facebook to say that they’re sick. Since India and Brazil generated quite large datasets, we would be able to make conclusions based on a significantly large amount of data.
When an outbreak of any disease is starting to proliferate, doctors talk about it, the media talks about it, and people talk about it. When visiting friends, going to work, or having conversations with family members, possible outbreaks of fever are always “the talk of the town.” In autumn, during the change of seasons when fever outbreaks are more common, even commercials adapt to this situation. Ads for cough syrup appear more often than usual.

Mood clouds
We focused on words in multiple languages in order to gather as many results as possible, mainly adjectives that express an emotion, a state of mind, or a mood. Valuable messages for us could be Twitter posts with sentences like “I’m ill,” “I feel sick,” “Many patients at the doctor’s,” “Many of my friends have fever,” etc. Monitoring words like “sick,” “fever,” “ill,” “illness,” “bad,” “pain,” “headache,” “feeble,” “afraid,” etc., in combination with each other over time, looking to peaks in the number of messages along with more engagement by people who retweet, start discussions, etc., could indicate a possible outbreak of fever in a certain region.

First, we searched for regions where outbreaks were detected during the last several months. The following picture is rendered by the open source website Healthmap.org and shows a cluster of outbreak cases in the Kanataka region in India in June, 2016. The red and purple dots indicate multiple verified cases of dengue fever. 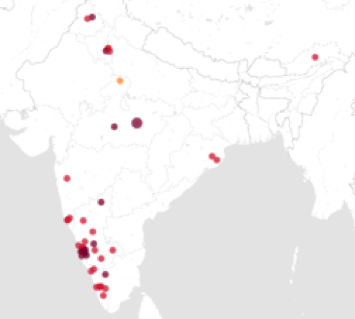 Figure 1 Outbreak of dengue in the Kanataka region in June 2016 (source Healthmap.org)

Next, we zoomed in and started to gather social and online messages from this region, focussing on words associated with emotions. The next three word clouds show the top 25 results from January to March. 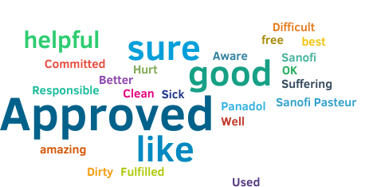 These mood word clouds already indicate a shift in discourse about dengue. People in the Kanataka region, whether journalists, bloggers, or citizens who posted on Twitter or Facebook, started to talk about dengue as a more or less far away problem. Words as “Panadol,” “Sanofi Pasteur,” “clean,” “helpful” or the main word “approved” indicate preparatory policies and a search for cures to the disease. An outbreak is still far away.

In February and, more obviously, in March, the discourse changes. More words related to symptoms begin to appear: “cold,” “feeble,” “overworked,” or “positive.” At the same time, words like “hope,” “prepared,” “clean,” “fear,” or “determined” indicate an increase in worried reactions for a possible outbreak. Looking to the words people use in association with dengue the two months before and the month of the outbreak, the shift in discourse is even more striking. 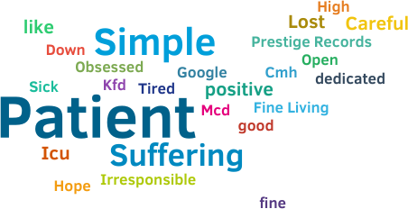 Words such as “patient,” “suffering,” “desperate,” “critical,” “alert,” “stagnant,” or “ICU” (Intensive Care Unit) jump out and are used very frequently. This could indicate that an outbreak has taken place. At the same time, we see terms associated with the Indian government emerge: “Arvind Kejriwal” (the Chief Minister of Delhi) and “Mcd” (Municipal Corporation of Delhi). The next months, these political leader names will emerge even more and correspond to the giant peak in September.

What did we learn from these results? By associating mood words with dengue, we were able to detect shifts in discourse about the disease itself. By using a relevant search query, related to mood words and terms that are linked to symptoms (“cold,” “illness,” “fever,” “feeble”, “headache,” etc.), social media monitoring tools could be used to detect possible outbreaks in a premature phase.
Crossing medical and health data with social and online media messages could in this way provide valuable insights to governments, international institutions as the WHO and UNICEF, or local health organizations.

Europe
Despite the fact that the time we had for our presentation was limited, we wanted to make a rapid analysis of the situation in Europe. The timeline and the associated terms show that the European news on Dengue is linked to Brazil, with the same timeline and associated words with South America’s countries and virus. Further, as a remarkable coincidence, the same number of YouTube videos in Brazil and Europe were posted: 11,000 videos, though the Minecraft aspect seems more common in Brazil than in Europe. Without any surprise and due to the linguistic proximity, Spanish is the leading language in Europe.

Conclusion
It seems important that India treats the Dengue virus as a societal issue to spread the message more widely (and act on prevention more than reaction). The best way to do this seems to be to associate a public figure for the communication. In Brazil, both national and international institutions are a good ally. We would like to underline the increasing importance of alternative mediums such as YouTube, Minecraft, and WhatsApp as tools to prevent or stay informed on a coming Dengue explosion. Finally, Europe has to see the Dengue virus as a present threat and not as an exotic virus. Cases of Dengue were reported in Spain, Portugal, the South of France, Italy and even Germany. Considering the enormous economic impact it has in other countries, the risk of Dengue becoming endemic in Europe can’t be underestimated. These are our first conclusions of a rapid approach. Bringing more precise results and insights needs a deeper dive into the Dengue digital world.

You can view their presentation from the Hackathon here