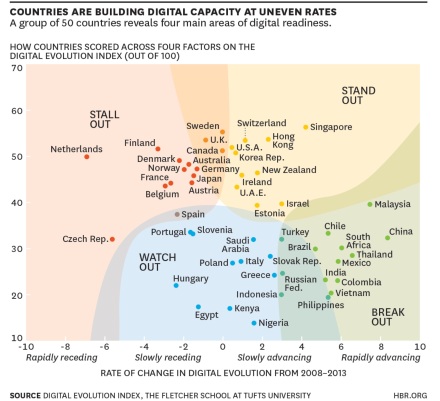 ‘Where the Digital Economy Is Moving the Fastest’

This article shows that based on the Our Digital Evolution Index (DEI), created by the Fletcher School at Tufts University (with support from Mastercard and DataCash), Belgium is ‘stalling out’. Like they say, Stall Out countries have achieved a high level of evolution in the past but are losing momentum and risk falling behind. My worry here is that we are positioned to be slower than France(wablief !).

I’m also not convinced that we are better prepared for the digital marketplace than the Netherlands as it seems but … , – “As part of our research, we wanted to understand who was changing quickly to prepare for the digital marketplace and who wasn’t.  Perhaps not surprisingly, developing countries in Asia and Latin America are leading in momentum, reflecting their overall economic gains. But our analysis revealed other interesting patterns. Take, for example, Singapore and The Netherlands. Both are among the top 10 countries in present levels of digital evolution. But when we consider the momentum – i.e., the five-year rate of change from 2008 to 2013 – the two countries are far apart. Singapore has been steadily advancing in developing a world-class digital infrastructure, through public-private partnerships, to further entrench its status as a regional communications hub. Through ongoing investment, it remains an attractive destination for start-ups and for private equity and venture capital. The Netherlands, meanwhile, has been rapidly losing steam. The Dutch government’s austerity measures beginning in late 2010 reduced investment into elements of the digital ecosystem. Its stagnant, and at times slipping, consumer demand led investors to seek greener pastures.”

So, High time for action, let’s do something about this !

The fact that President Obama calls out to the DataScience community for help shows clearly that our skills are highly valued. So, why don’t we all help to push the Belgian digital agenda a bit harder.

Let’s discuss this on March 26th, and let’s make sure that our Data Innovation Summit becomes the start of a new datascience initiative.

The Data Innovation Summit in Brussels is a one day conference gathering all the Belgian actors facilitating data innovation. It is an action packed conference where more than 30 speakers will demonstrate what they do that helps us compete in this digital marketplace.

As you can read in the recent post from Karsten Strauss in Forbes – no European center of technology comes close to matching the entrepreneurial factory of Silicon Valley.

Still, Europe has its bright spots. Last year the European Commission rated its top tech hubs based on complex indexes of data on information and communication technology research, education, employment and reams of other data. Germany’s city of Munich took the top position, followed by East London, in the UK; and Paris, France.

We are organizing a full day event to celebrate our first birthday.This event will be held in Brussels and hosted by AXA . The focus of the presentations will be on Belgian bigdata and datascience projects.Government, Universities and Companies will present the value they managed to get out of their analytic projects.In the evening we will have…

Check out this Meetup →

One thought on “Digital wake up call for Belgium – Call for action !”